SUKKUR: Sindh High Court (SHC) on Wednesday ordered construction of a new bridge over Indus River between Sukkur and Rohri, ARY News reported on Wednesday. People’s Party leader Khursheed Shah had filed a petition at Sukkur circuit bench of the high court seeking construction of a new bridge over Indus as Sukkur’s iconic Lansdowne Bridge has been in shambles. Shah’s counsel Mehfooz Awan in his arguments before the bench highlighted the necessity of building a new bridge over the river to connect the cities of Sukkur and Rohri on the left and right banks of Indus. The officials of the National Highway Authority (NHA) were also present during the court hearing. The bench issued orders for preparation of feasibility report of the new bridge within two months. It is to be mentioned here that the high court’s Sukkur bench had earlier took up a constitutional petition seeking proper upkeep of the Lansdowne Bridge. The bench headed by Justice Aftab Ahmed Gorar had issued notices to the Pakistan Railways secretary, the Divisional Superintendent Railways Sukkur, the provincial heritage secretary and the city’s deputy commissioner to submit their response to the petition by next hearing. Advocate Sohail Memon, a resident of Sukkur, had moved the petition stating that the bridge constructed over the River Indus and connects Sukkur with Rohri, is part of the country’s historic heritage but unfortunately, was in shambles due to several years of neglect.
Posted by Welcome Rohri City at 6:03 PM No comments: 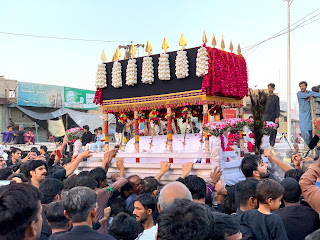 Posted by Welcome Rohri City at 3:31 PM No comments:

Faqir Qadir Bux Bedil 1814 1230 Hijri better known by his nom de plume Bedil (one bereft of heart) , was a Sufi Poet and scholar of great stature. After Shah Abdul Latif Bhittai and Sachal Sarmast other two stars that shone on the firmament of Sindhi poetry and who could measure up to them in excellence, were the father and son Bedil and Bekas. They wrote poetry both in Sindhi and Persian. Bedil was well versed in a number of languages, Sindhi, Persian, Urdu, Arabic and Hindi. He has written poetry in Sindhi, Siraiki, Urdu, Persian and even in Hindi.
Bedil was born to a very pious family of Rohri. His father Khalifo Muhammad Mohsun was a disciple of Sayed Mir Janullah Shah Rizvi who himself was a great saint of his time, highly venerated and was chief of forty cardinals of Sufi Shah Inayat Shaheed of Jhok Shareef. Thus Bedil was brought up in such a enlightened environment under the guidance of Mir Sahib himself. On his birth he was named Abdul Qadir but he preferred to be called Qadir Bux. He was a staunch Muslim who molded his life strictly according to the laws of Shariah. He was very simple and frugal in his style of living and gave away whatever he received, to the needy. He followed the path of Ishqu Majazi (Platonic love) to attain the heights of Ishqu Haqiqi (spiritual love) as dictated by Mystic doctrine. He was a devotee of Lal Shahbaz Qalandar of Sehwan also. Although he had deformity in one foot, yet he undertook long journeys to Sehwan to pay his homage to the Saints Shrine. He went to Jhok Sharif to pay homage to shrine of Sufi Shah Inayat Shaheed and also to Daraza, to visit the shrine of Sachal Sarmast. Fakir Muhammad Muhsin Beqas (1275 Hijri / 1958 A.D. - 1298 Hijri / 1882 A.D 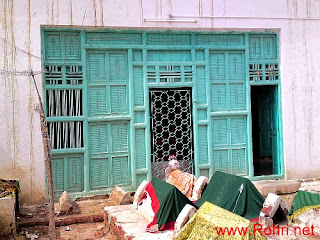 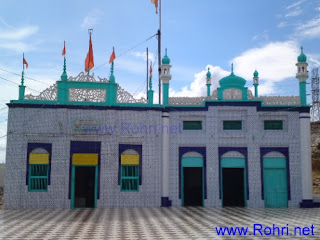 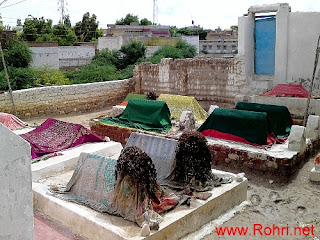 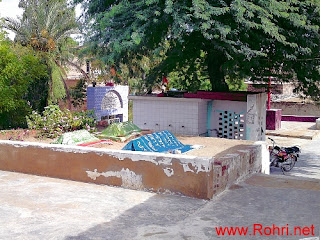 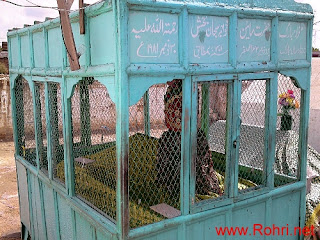 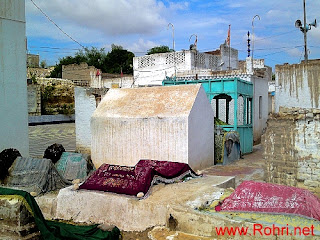 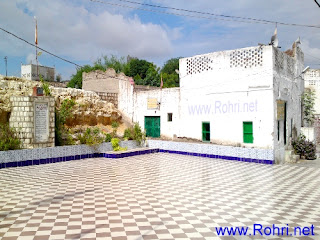 Opposite Rohri is a small island of which about half an acre remains above water at the height of the inundation. This has been enclosed with a wall and contains a shrine to which Muslims and Hindus come together in thousands from all parts of Sindh in March and April, the Muslims to honor Khwaja Khizr and the Hindus, Jind Pir, (Jind is a corruption of Zinda; Zinda Pir means the Living Saint). Eventually the possession of the shrine became a bone of contention between Hindus and Muslims, but the matter was settled when the Hindus abandoned their claim and set up a shrine of their own to Jind Pir on the Sukkur bank of the river. The Public Works Department, under resolution No. 55-W-1 650 of 10 April 1894, sanctioned a piece of land measuring 16.50 ghuntas approximately to the Panchayat (Council) of Sukkur for the use of the Jind Pir Fakirs trust, i.e., after executing a trust deed in favor of Bhai Balo, the leader of the Fakirs at that time. According to the trust, he and his successors would receive Rs 15000 for discharging certain duties in connection with the shrine and monuments. The Muslim legend is that a Delhi merchant by the name of Shah Hussain (Saiful Muluk) was traveling down the Indus by boat with his daughter, Badu.-i-Jamal, on their way to Mecca. On their arrival in the city of Alore, Daluraj, the Hindu King, who had heard of the great beauty of Shah Hussains daughter, demanded her in marriage. He was refused, being told as a reason that it was impossible for the daughter of a follower of the Prophet (PBUH) to wed a Hindu. Not content with the reply, the king determined to carry her off by force; but as the girl was offering prayers to Khwaja Khizr, the saint directed her father to cut loose the boat. As soon as this was done, the course of the Indus changed and the stream began to flow towards Rohri, carrying to safety the boat and its passengers. In gratitude for this miraculous deliverance, Shah Hussain resolved to erect a shrine in honour of the saint who had thus befriended them. In answer to his prayer he was directed to carry out his purpose on a small island a little to the north of Bukkur, and here he built a mosque and a mausoleum, in honour of the saint, which in later years was enlarged by wealthy votaries who were said to have covered the door of the original tomb with sheets of silver. Unfortunately there is no trace of either of these buildings.
The Hindu identify Khawaja as Jind Pir (properly Zinda Pir), i.e. the living Pir who is no other than the incarnation of the river Indus, elsewhere called Uderolal, Darya Shah, etc., to whom they burn a light. The central building with the silver doors, be it tomb, temple or cenotaph, contains a niche which is the seat of the saint and above which a slab of stone clumsily built in to the wall bears a Persian inscription which has been translated thus:
When this court was raised, be it known that the waters of Khizr surrounded it; Khizr wrote this in pleasing verse." Its date is found from the Court of the High one. The words Dargah-i-Ali, give the date 341 which correspond to AD. 952. To the south-west of the shrine is a ruined brick masjid with an inscription which gives the date AH 1011 (AD 1602).The mujawars (guardians) of Satyan-jo-Asthan and of Khwaja Khizrs shrine were holding lands as khairat (charitable grant) before the British conquest, discharging certain holy duties around the monuments and shrines in their charge. Sir Charles Napier continued the practice. On One of The Bank of Rohri River, Sindh 952 A.D. 341 Hijri 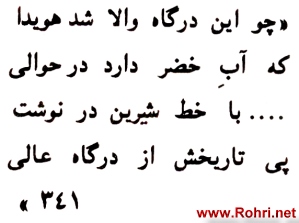 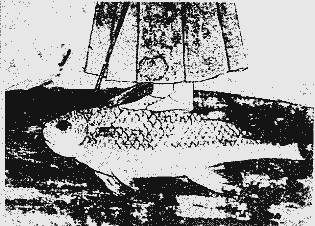 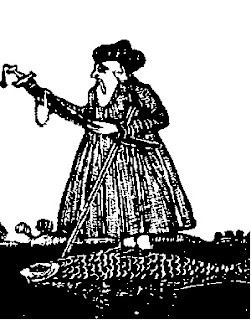 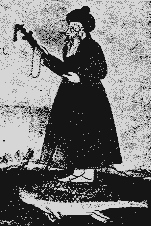 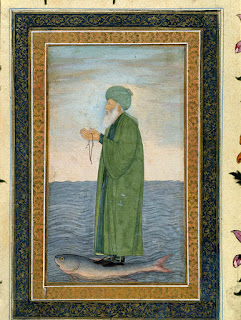 Posted by Welcome Rohri City at 11:35 AM No comments: 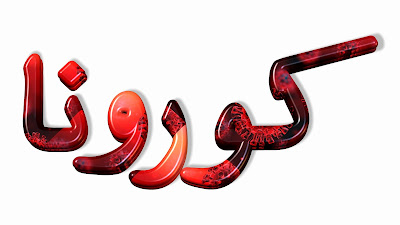